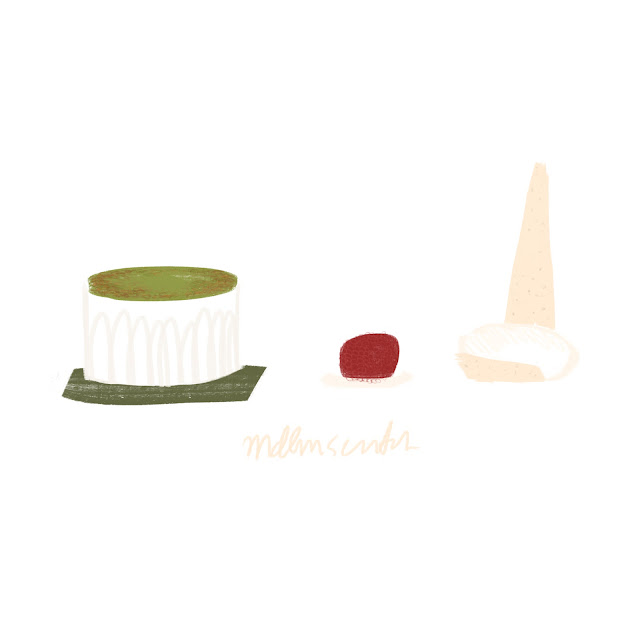 Last week, my friend and I met up at Kyotofu for brunch. From the name, you might have guessed that this Japanese dessert bar incorporates tofu as a featured ingredient on its menu. I ordered the Green Tea Crème Brûlée which was nothing like the desserts you'd expect to find at your local vegan restaurant. Expecting a dense bite of health-nutty richness, I was pleasantly surprised and welcomed by a pure creamy, melt-in-your-mouth goodness. The elegant plating reminded me of the minimalist artwork you'd expect to find at the MoMa and each element undeniably complimented one another--from the juxtaposition of the glassy caramel surface encapsulating the ethereal texture of the custard to the singular pickled garnish. To your right, the brittle tortilla-chip-like crisp speckled with vanilla bean and orange peel (I suppose) delicately cradled the lone scoop of vanilla bean ice cream. Though each element of the dessert appeared simple on its own, their culmination evoked a delicate symphony of complex flavor. 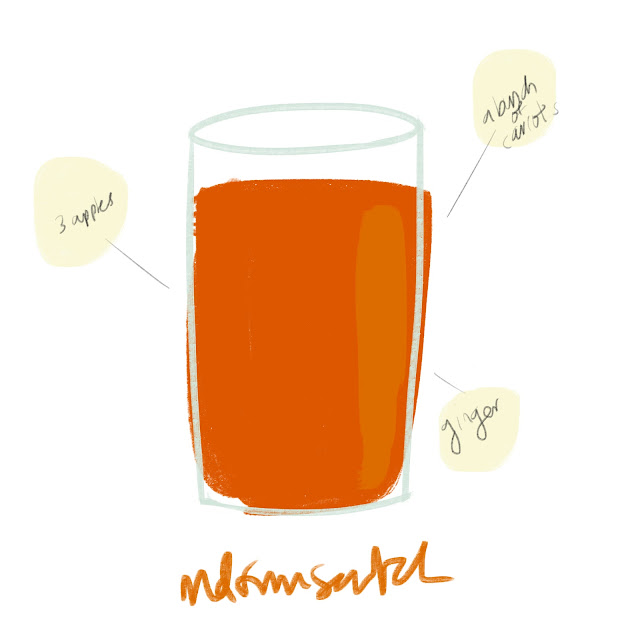 Last week, my brother and I were in the mood for carrot cake so I decided to make and film a somewhat healthier version of this scrumptious dessert. The recipe called for around two cups of carrots, grated and strained. I forgot to pick up cheesecloth at the grocery store, but I soon realized that I could have easily acquired the "grated and strained" effect from carrots if I used their pulp from a juicer! That meant a new project--so as a result, this recipe (and video) was born!! I think using leftover pulp from your carrot juice works incredibly well for this sort of recipe: as a result, my carrot cake was not soggy or mushy at all! The texture rendered light and slightly crumbly, but the shape held together for the most part. In short, it was just divine! There were no chunks except that of the raisins and desiccated coconut--exactly the effect I was looking for! I would totally just roll the batter up into little balls or cut them into bars for a snack the next time I make them (which I will)!

The juice was pretty good as well--for a juice, it was surprisingly rich and the ginger gave it the perfect amount of pizazz! (Haha seriously, who even uses that cheesy word anymore?) I haven't juiced since the summer so I forgot how ridiculously simple it is to pump out a glass of liquid gold (or orange, in this case). The only thing that's somewhat of a nuisance is cleaning the entire contraption. Does anyone know of an easier way to accomplish this? As the weather warms up, I'm looking forward to making more juices and smoothies! Ah, I am loving spring! 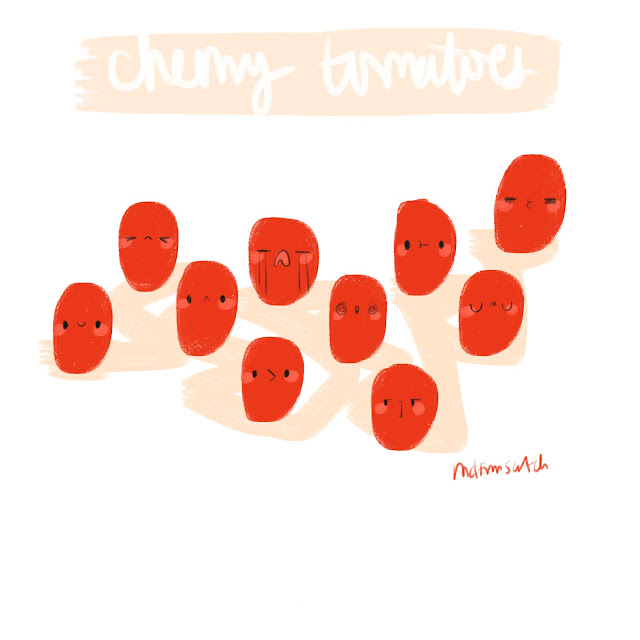 Hey, Y'all! So I know it's been a week since I've last blogged so I want to catch you up on what I'm up to so far. If you've checked out my cooking channel recently, you might have noticed that I uploaded two videos documenting a particular event. Last week, one of our chickens passed away, so instead of burying it like normal people, my dad and I decided to do something we've never done before: we decided to make him into dinner. To be honest, the whole experience was a lot less jarring than I had expected it to be... but the gut removal process was really annoying! I think I spent the entire afternoon cleaning out the chicken (funny how a few hours can be condensed into only a couple of minutes). The end result wasn't what I had expected it to be either; instead of tender juicy roast chicken, we ended up with this stringy game-flavored meat--kind of chewy, kind of tough. Definitely not what I had in mind. The roasted vegetables steeped in juices were scrumptious though--I wish I had doubled the amount! Anyway the next day--I'm not really sure why, but I felt compelled to eat only raw fruits and vegetables. So I did.

I've been partaking in this ordeal for a week so far--only on-and-off, nothing serious, but I'm curious what would happen if I did this thing for like, 30 days or something. I've been vegetarian and vegan before, but I've never really seriously considered eating only uncooked food. To be honest, the videos of those raw foodists supporting their health claims leave me kind of skeptical, but there's something about their dispositions that are so mystifying. It's almost supernatural in some cases--all this abundance of energy; feeling great and amazing--who wouldn't want to feel like that?! I want to feel like that!
I guess I'll update you more with all this raw food stuff soon.

By the way, I am totally digging this kale salad. It is really delicious and hearty, and so incredibly simple--I'd use less onion (or use a red onion instead of yellow), and add in more lemon juice though. Let me know if you try it out!

Sincerely,
Jenny
Posted by Jenny at 9:12 PM No comments: 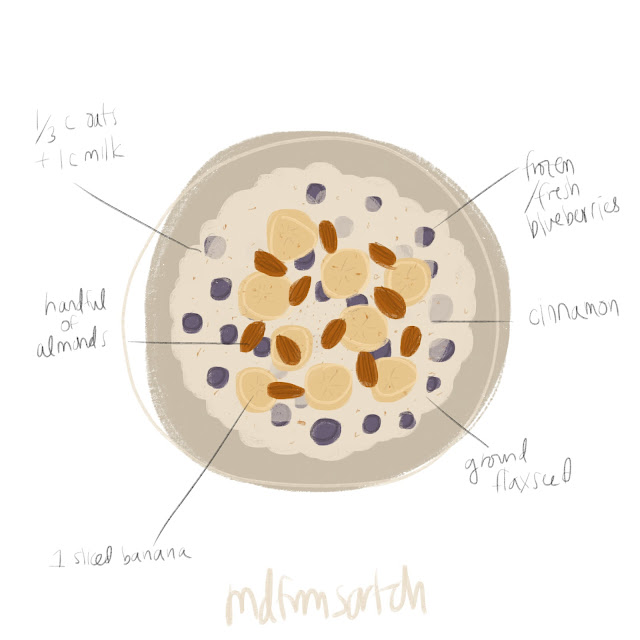 Today, I want to share with you my go-to breakfast: Banana Blueberry Oatmeal. It's super easy to make and totally satiates me up until noon. Basically, I throw in 1/3 cup of oats, along with some almond milk (use any milk of your choice) into a small pot and cook on high until the mixture begins to bubble and thicken, and most of the liquid has evaporated... Then, stir in a 1/3 cup of blueberries (fresh or frozen; doesn't matter), and pour the purple, bubbling concoction into your breakfast bowl. Finally, slice up a banana, and add a handful of toasted almonds and a sprinkle on cinnamon. Super easy and pretty darn nutritious. Let me know if you decide to try it!

Also, if you'd like to see a quick video of this recipe, feel free to check out the one I made from my youtube channel.

P.S. What are your favorite oatmeal toppings? Mine are definitely blueberries and bananas, but sometimes I like adding in some nut butter and maybe even a dash of cocoa powder :)
Posted by Jenny at 8:41 AM No comments: 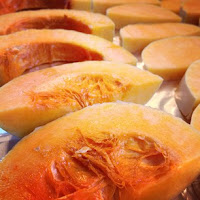 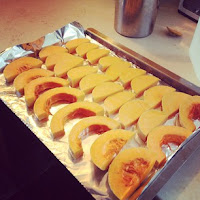 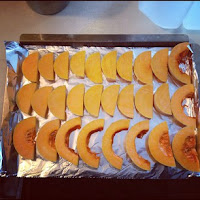 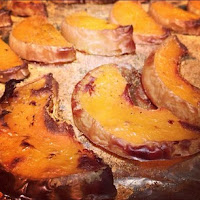 Hey y'all, I decided share with you some photos from my butternut squash experiment last night. My dad wanted to use up this veggie so instead of throwing it into a stew like I always do, I decided to try something new.

I started by preheating the oven to 400 degrees.  Being too lazy to peel the skin, I left it on after scrubbing the squash thoroughly. I sliced hacked the cumbersome vegetable with a meat cleaver into neat little rounds. Unable to squeeze everything onto the roasting tray, I then cut each circle in half so everything could neatly fit. Taking a bunch of spices from the cupboard, I used a combination of black pepper, cumin, onion powder, garlic powder, and nutritional yeast. Since my dad avoids any sort of processed vegetable oil in his diet, I omitted the EVOO most people who toss in and decided to give this fat-free version a spin. The squash definitely had enough moisture alone because after 30 minutes, when I took out the sizzling tray to give everything a flip--nothing was burned--in fact, everything was mouthwateringly tender to the touch and delightfully steaming. If I sliced even the butternut squash even thinner or used a mandolin, these would have turned out to be scrumptious chips!

If you're running short on time, 30 minutes is definitely enough to cook these babies through--you just won't get that nice caramelized layer--so I'd definitely recommend the full hour (30 minutes, flip, another 30 minutes) in the oven. Trust me, you won't regret it.

The peels were kind of a nuisance, so I think I would make the extra effort to peel the entire squash before I throw it into the oven next time. Nonetheless these spiced, fat-free butternut crescents (sounds fancy, doesn't it?) were a big hit with both my dad and I. Personally, I felt like the squash didn't need much seasoning at all because it was so good on its own, but I shall definitely be recreating this dish (with the new adjustments) again for you all. :) 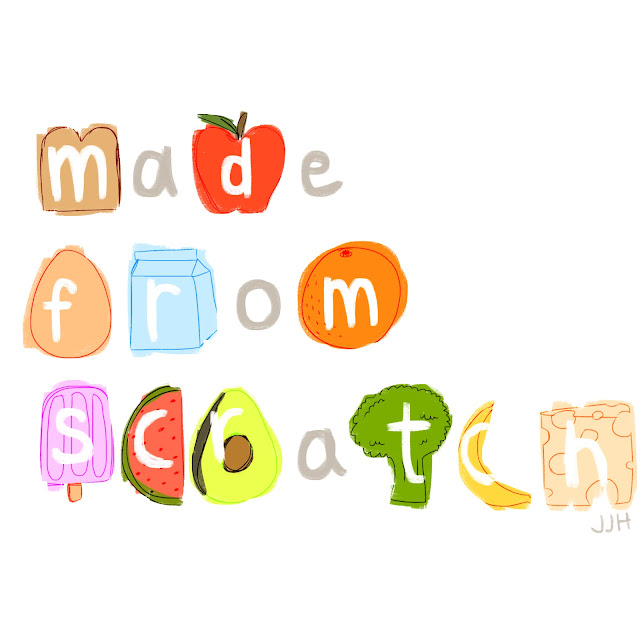 Dear mysterious stranger,
Welcome to my cooking/food-related blog, mdfrmscrtch. I've created this blog as a way for me to learn more about the slow food movement. Around a year ago, I stumbled upon the term "slow food" at the Brooklyn Food Conference. I was immediately intrigued, but never had the opportunity (or time) to really look into the subject. Since I'm taking a semester off from college, I've decided to start this blog to better inform myself--and hopefully you as well, on the rising obesity epidemic in America. I'll also be showing you how to cook healthy, quick, and super tasty meals which will definitely be able to satisfy your malnourished appetite. Since I also love to draw, expect more mouth watering photos and illustrations in the coming weeks!

I'm looking forward to sharing these new discoveries with you.

P.S. If you're interested in fashion, feel free to check out my thrifting blog goodwillgrrl :)